I've been working on the "social networking" aspects of Loopi - the ability to save "loopi voice" files to a net repository, tag them, describe them and control their permissions as to who can see them. A lot of that is not done yet, but, another thing I'm working on is saving the audio in various formats. for instance, if you save it as m4a (mp4) with a suffix of m4r,it's a ringtone that can be downloaded from the repository and opened in iTunes, ready to synch to the iPhone.

This example came from the iPhone, not the simulator:
Click and open in iTunes.

I'm wondering if m4r's opened in Safari on the phone install themselves as ringtones. I suspect not. That would be too easy!

Loopi is growing some nice features.

Loopi is a radial sonogram paint program.
It's a whole lot like RGS, even sharing its color scheme for the sonogram.
You can make up to 30 second samples by drawing their sonograms.
Many of RGS' "pens" are available.
Right now, I'm trying to get the recording/heterodyne filter part to work on the device, which works in the simulator. With that, you can record
audio and turn it into a Loopi radial sonogram and alter it.

Loopi will also be able to save its songrams, parameters and sounds and allow sharing of these entities. 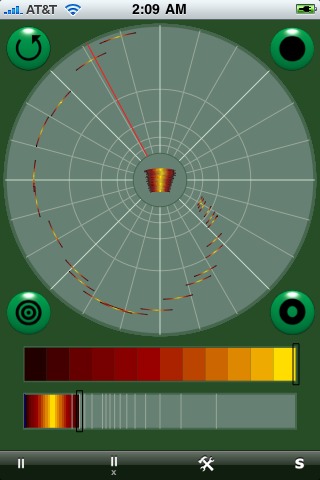