Another casualty of the Apple Purge is Wind Chimes. Wind Chimes has an interesting history! When the iPhone first came out, it was a sensation! and after a few years, the second version, confusingly named the iPhone 3G, came out. I was thinking, now people will have this great device lying around that is out of date! Why not make it have a dedicated purpose of some sort? And so, the Wind Chimes, taking advantage of the accelerometer, was written and released in November 2008!
When the iPad was released, I updated Wind Chimes, and that was basically the last time it was touched. Wind Chimes is one of the very few apps that actually runs (after a fashion) on ALL IOS devices. Because of the way the Apple development system works now, it'd be really hard to keep up this compatibility. So I'm sadly writing a new Wind Chimes, which will run on OS's 8+ I think, and natively accommodate newer hardware. It'll also be using AudioKit for its infrastructure, which means it might be able to connect to AudioBus and iAA. The original animations and bars will be there, but I may add a few more and make it more customizable. There may be more kinds of chime sounds and user-created chimes. Also, it may have a more sophisticated generative music section.

But one thing at a time!


Version 1.0.2 fixes some bugs, makes automatic mode a little more snappy, makes it a little more responsive to movement, cleans up some internals, and now allows Wind Chimes to run in full resolution on your iPad!


Yes, Wind Chimes is the first of my apps to go Universal .. I hope it is accepted by the Apple folks. It's tricky to get some of those proportions right!

NEW! volume slider! it goes to 150% (because the chimes often aren't all playing at once and decay quickly) 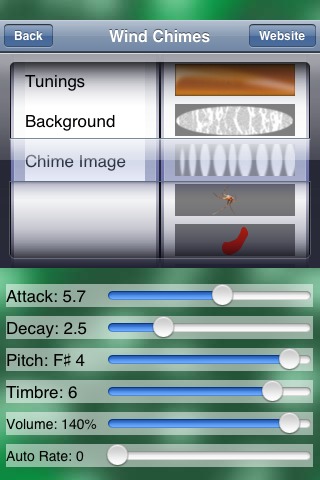 This update fixes some pesky anomalies with 2.2 :

Finally, the Wind Chimes are available for purchase ($1) in the App Store!

Another chance to bliss out!

Find it in the Entertainment section.

Until then, you can search for it. or use this URL:

I just uploaded the wind chimes for Apple to test - maybe it'll be available next week!
-- actually it got rejected because of the splash screen with an iPhone on it. Maybe by Thanksgiving!


Meanwhile, I've been fiddling with the Sruti Box. Some new features will make it somewhat more complicated,
but I don't want to force (or compel) the thousand or so current users to upgrade if they don't need those features.

So I'm trying to see if I can take the current version and re-submit it under a new name, (maybe making it a dollar cheaper),
while the upgrade will remain a free option for the current users, and new adventurous people will also be able to
get the fancier application (It's not that much fancier).

Ideally, I'd also like to be able to give a discount on SrutiBox to those who buy the wind chimes.


email me with your ideas -- tutti-srutti@jhhl.net.