SrutiBox hasn't been touched since 2010, and it kind of soldiered through iPads, retina, iPhone5 phones ... but now with iPhone 6 and 6+, and ios8, Sruti stopped working.
It was actually due to the way the Accelerometer is being handled these days.
So I'm fixing it, giving it a new look, but not making it iPad sized ... it really doesn't need it.

This version will start at iOS 7.1, so old devices won't need to update, they can leave it alone,

It's also not getting any features like AudioBus or IAA. I'm leaving that more sophisticated stuff to Droneo and whatever I replace Droneo with.

It MIGHT get some new or better sounding timbres, and get a few bugs fixed.

It is SrutiBox's 2nd birthday in the App Store!
You, my beloved readers, carnatic fans and droners, have bought nearly 3000 of them!

I just uploaded SrutiBox 1.3 for approval in the App Store - this version runs in the background as well it should under iOS 4.0.
The only thing is, the accelerometer gets turned off in the background ( it's something that happens with Wind Chimes too ...) so the pumping feature doesn't work there, but otherwise, it's really useful.
Also, I ported over the base frequency fine tuner from Droneo: so if you are using SrutiBox with a "real" instrument that has its own peculiar tuning, you can get it pretty close with this convenient slider.

As a side effect, I noticed that the AppStore no longer is interested in apps that will run under 2.0. I had to bump it up to 3.0. Sorry, impecunious and cautious early adopters!


Droneo is also getting an update, but it's more ambitious, because Droneo is where the real drone research is going.

Comment I mad in the NYT Bits Blog today

December 4, 2009, 7:57 PM
An iPhone Can Make Music, but Is It Art?
By CLAIRE CAIN MILLER AND MIGUEL HELFT
Is music still music when the instrument is an iPhone?

Computer based music has been around for decades, and an iPhone or iPod Touch is a great way to bring these ideas and techniques about musical composition, timbral quality, microrhythms and non trivial real time manipulation of sound out of the lab in into the pockets of millions of people. Smule's apps are very popular - and get a lot of publicity as well - and the iPhone is joining forces with the already extant 8Bit subculture as a popular digital folk instrument. That the 'phone is being used in more traditional concert situations is also encouraging: Dr. Pauline Oliveros, recognized with the 2009 Schuman Award for a lifetime of musical achievement, will be using my iPhone app, SrutiBox as part of a concert in March 2010 at Columbia University's Miller Theater to honor her work.

I've submitted SrutiBox v 1.2.2 ... mostly to fix a bug that probably nobody gets yet, but may crop up in a future OS.

Version 1.2.2 fixes some minor bugs and tweaks the available timbres a bit.
- the base frequency can be set down to 0.01, which is good for impulse experiments.
- new Impulse 2 timbre
- faster building vocal timbres.
- bug having to do with non-scrolling Instructions fixed. 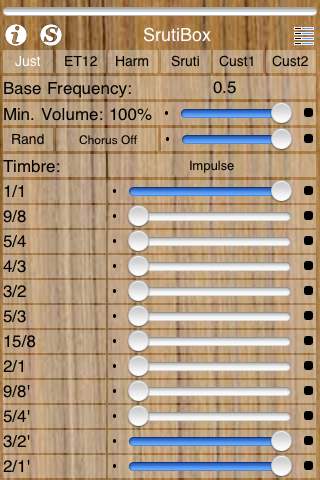 Poking about in my stats, I see that more than 2,000 SrutiBoxes have been sold!

Thank you, customers and droning fans!

I am now using a business card with a picture of the Srutibox Screen on it.